On January 15th, 2016 a tense exchange occurred on the floor of Myanmar’s parliament. A parliamentarian with the then-opposition, now governing National League for Democracy (NLD) was discussing his opposition to the military’s role in Myanmar’s economy, saying it benefitted only officers rather than ordinary soldiers. Shwe Mann, the powerful speaker of the house with the military-backed USDP, cut him off, saying he was tarnishing the dignity of the armed forces and that, “this should be the last warning.” These are ominous words from the former third-ranked member of Myanmar’s military junta.

But the implications are even more troubling when you consider that Shwe Mann is considered a comparatively reform-minded member of the military establishment who was recently expelled from the USDP for his willingness to accept a position in the NLD government. While contentious interactions are far from rare in parliamentary chambers the world over, the dynamics of this brief exchange may be emblematic of potential pitfalls for civil-military relations in one of the world’s newest (semi) democracies.

As Myanmar moves along its fragile transition towards democracy, last November’s election and the assumption of power by the NLD in March would appear to be major milestones in securing the future of civilian rule. We know from analysis of past coups that the risk of a coup attempt increases rapidly in the months leading up to an election, but drops off sharply afterword as potential plotters realize that the enhanced legitimacy of recent elections reduces the potential for success of any coup attempt. But while evidence of this trend is strong on aggregate, it cannot account for variation in the institutional interests of militaries across time and location. In Myanmar, successful elections and the beginning of civilian governance may not trigger the reduction in coup risk historical trends would suggest. Rather, the country’s coup risk may depend more on whether or not civilian rule is perceived as threatening the individual and institutional economic interests of the military.

The armed forces of Myanmar, or the Tatmadaw, have deep individual and institutional interests in the economic status quo. The Ministry of Defense has controlled an empire of military-owned companies. The two primary components of this military-economic complex have been the Union of Myanmar Economic Holdings Ltd and Myanmar Economic Corporation. These two large conglomerates have economic interests in a variety of industries and hold massive sway over the national economy. UMEHL alone is thought to hold interests in up to 70% of the country’s major companies. These military firms have benefited from favored access to government contracts and monopoly positions in many industries. During the recent period of opening up, foreign firms seeking to enter key sectors of the market often need to form joint ventures with military linked companies in order to win contracts, acquire permits and gain access, creating lucrative partnerships for military controlled firms. To this point, these enterprises have operated with virtually no civilian oversight and no transparency. Their profits have been used as large sources of off-the-books revenue for military spending.

While changes to these conglomerates are beginning to emerge as part of the larger economic transition, the military interests remain. UMEHL recently announced it was becoming a public company. At first glance this might appear as a sign of the military reducing its role in the economy. However, while the Ministry of Defense will lose its 40% stake in the conglomerate, the 60% of shares owned by current and former members of the military will go untouched, thus protecting the individual financial interests of the military elite.

The elite of Myanmar’s military in particular have tremendous personal interest in maintaining the economic status quo. The lack of civilian oversight over military companies provided ample opportunities for corruption to line the pockets of both active and retired generals. Many current and former military elites have also used their influence to profit through firms which they own personally or through proxies in a system of crony capitalism which has created a military-business economic elite. In addition to the recorded profits of these military linked firms, such companies are also know to profit heavily from the smuggling or elicit production of jade, timber, gems, heroin and methamphetamine. Jade is perhaps the best documented of the industries dominated by this kind corruption and profiteering. 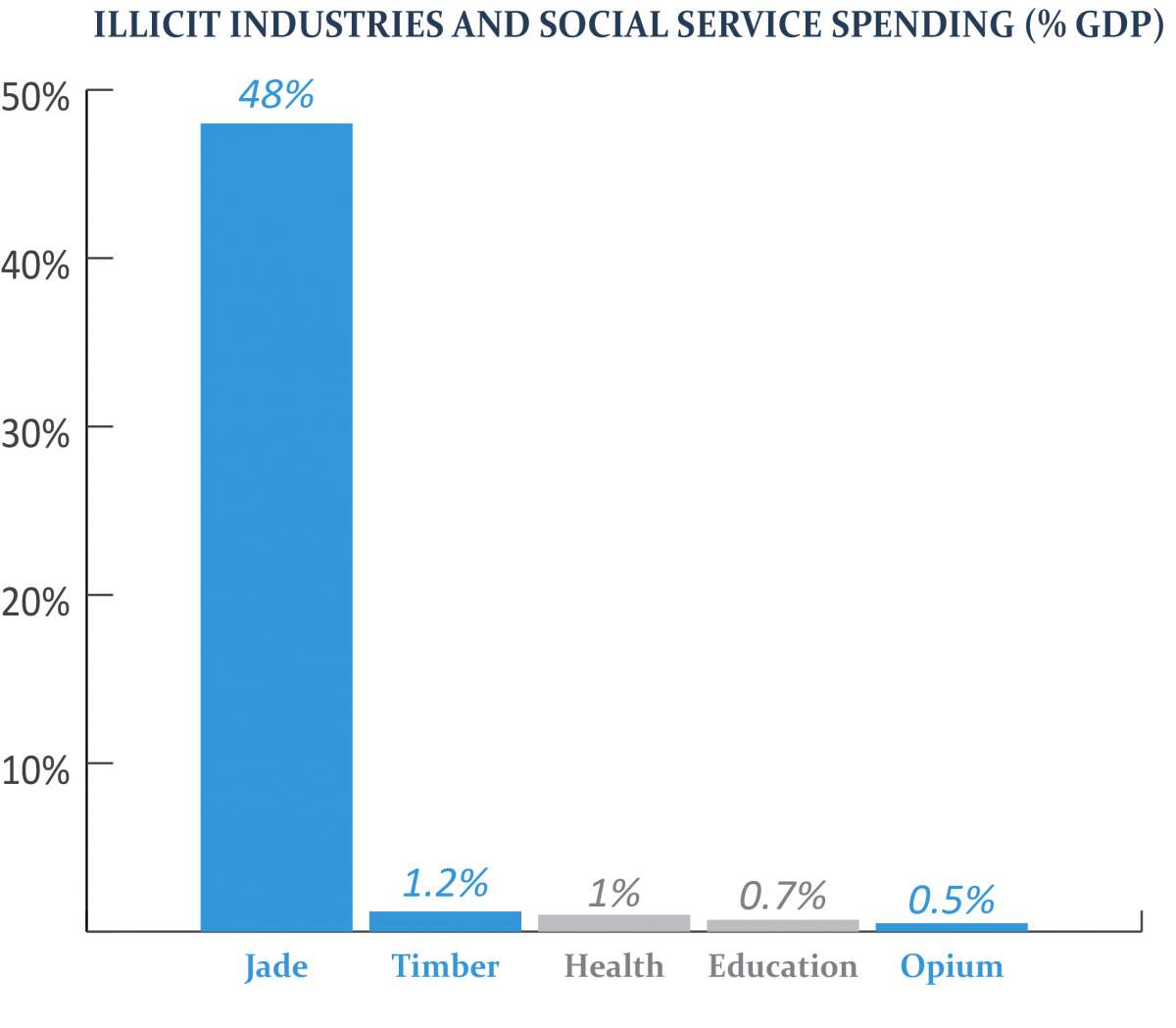 A recent report by the organization Global Witness provided excellent insights into the way in which military elites profit from the lucrative jade industry in Myanmar. The report estimated that legal and illegal jade production in Myanmar was worth $31 billion in 2014, a figure which is 48% of official GDP and 46 times state spending on health. However, relatively little of this wealth makes it into the hands of the civilian government. Military owned companies and firms with close personal links to the Tatmadaw elite maintain a massive share of the jade market and much of the industry is dominated by smuggling of high value stones while only recording the sale of lower quality jade. The system of smuggling ensures military elites profit tremendously while denying the state a significant source of income and reducing state capacity.

The new NLD government in Naypyidaw is faced with tremendous challenges, one of the most difficult and consequential of which is ensuring recent economic reform continues apace. Decades of isolation and economic mismanagement have left the economy far behind its neighbors. Cambodia is the only ASEAN member with a lower GDP per capita. Economic reform will be crucial if the NLD is to maintain legitimacy and meet inflated expectations by raising individual standards of living and generating revenues to improve woefully underfunded public health and education systems. 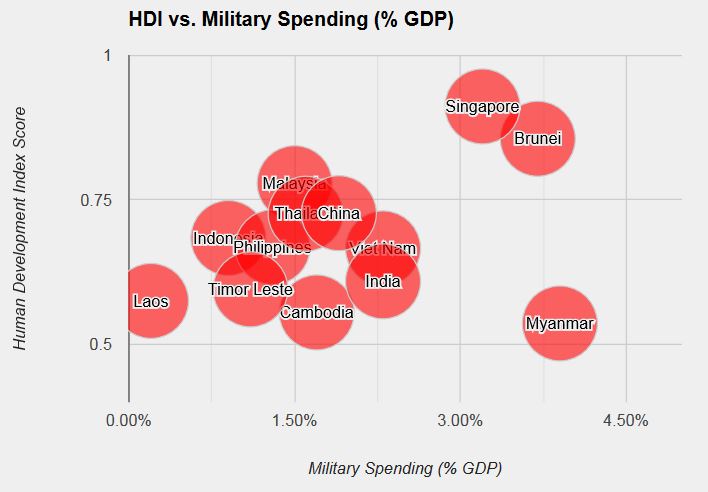 While necessary for growth and domestic legitimacy, the economic reform process also has the potential to threaten the institutional and personal economic interests of the military in a variety of ways. At a personal level, NLD efforts to seriously investigate, punish and prevent corruption, money laundering and smuggling of natural resources and narcotics threaten the personal business fiefdoms assembled by the military elite. Corruption, money laundering and smuggling are the bread and butter of these companies and effective efforts to combat them could have a significant impact on the wallets of military elites. Much needed land reform efforts could also impact the military’s bottom line. Under junta rule, land could be seized by military companies for mines, dams, factories and the like with little compensation or recourse for residents. Land reform laws which make gaining access to resources more difficult or create the potential for legal challenges surrounding property previously seized by the military or firms owned by the generals are likely to ruffle many feathers among the armed forces.

At an institutional level, any NLD attempt to restructure government spending in a manner which significantly reduced Myanmar’s defense spending may also increase the risk of coup.