Ballots are counted in Haiti after first round of presidential elections. Although the election process was drawn out for 14 months, in February, a new president was sworn in. UN Photo/Logan Abassi

There are plenty of reasons to be pessimistic about the future of international affairs in mid-2017. Democratization has stalled, developed democracies are succumbing to populism and authoritarian reforms, nuclear tensions are increasing, global battle deaths are on the rise after a long decline, and decades of global economic growth have failed to prevent the worst famine for generations. But here’s one reason to be optimistic: 2017 is on track to become just the second calendar year in nearly a century without an attempted coup d’état. 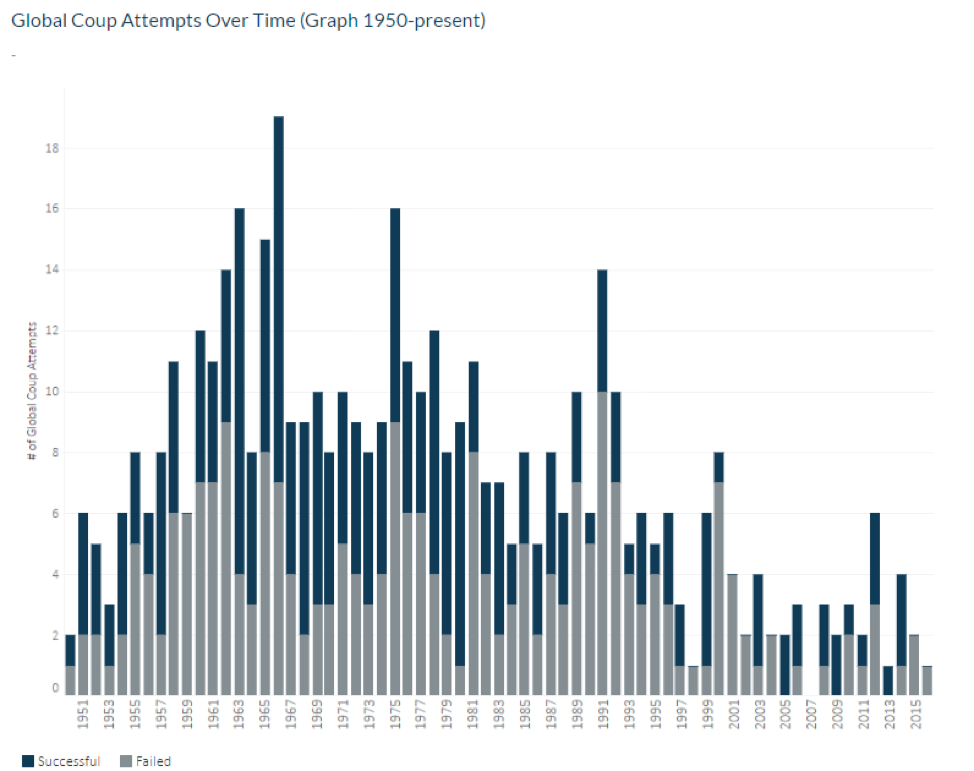 If 2017 can end without a coup attempt, this could be a monumental step toward reversing some of the trends listed above. Coup attempts are a leading threat to transitional democracies. As we have seen in Turkey and Burundi, coup attempts give leaders a pretext for widespread repression, human rights abuses, and political purges. Coups trigger civil wars, slow economic growth, destabilize entire regions, and can even undermine international alliances and trading relationships.

So are we moving closer to a world without coup attempts? CoupCast, our coup forecasting project, suggests we should be cautiously optimistic about the chances of a relatively coup-free world on the horizon.

CoupCast learns from past coup activity to predict coup risk in every country every month. It forecasts months into the future using historical data, and we can collapse these country-by-country and month-by-month risk estimates to generate a global annual coup risk, or the chance of a coup occurring anywhere in the world during the coming calendar year.

CoupCast: estimated risk of at least one coup attempt occurring somewhere in the world over the next calendar year, 1975 - 2017 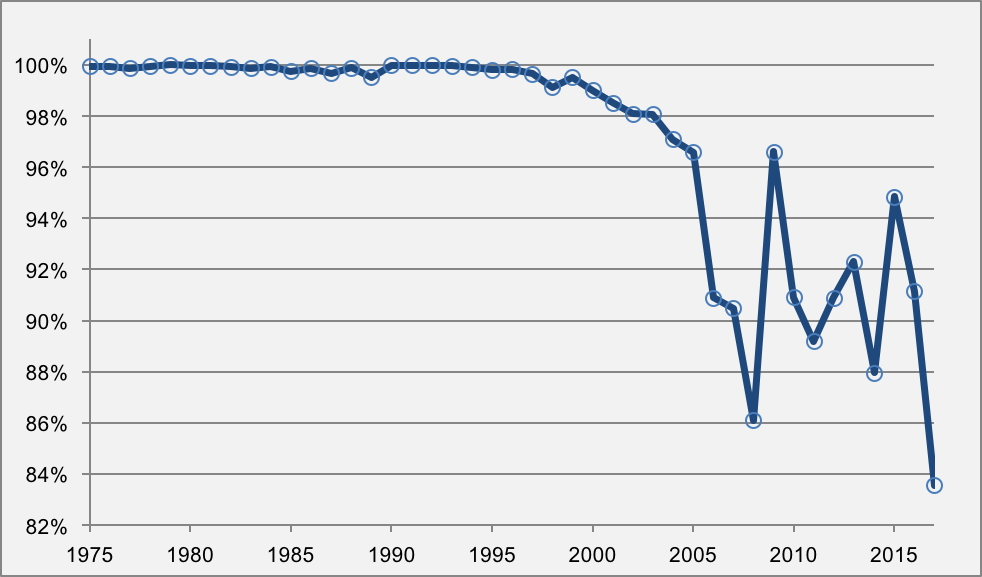 CoupCast estimated the risk of at least one coup attempt occurring anywhere in the world at greater than 99% for every year between 1975 and 2000. Indeed, each of these years saw at least one attempted coup. CoupCast predicted a global annual coup risk below 90% for the first time in 2008 and in 2017 this estimate fell to an all-time low. Going into 2017, CoupCast predicted an 83% chance of a coup attempt occurring somewhere in the world. With five coup-free months behind us, the risk of one coup attempt happening before 2018 stands at just 61%.

This means there is still a reasonable chance of a coup occurring sometime before 2018. This is driven by poor political conditions across the Sahel and several upcoming elections that could serve as coup triggers. These contests include six more elections in Africa, two more in central Asia, and other elections in recent coup-suffering countries like Papua New Guinea and Honduras. The CoupCast will continue to update coup likelihoods as political conditions change throughout the year. Predictions are updated on our website monthly.

COUP-FREE YEAR: A STATISTICAL ANOMALY OR A SIGN OF ENDURING CHANGE?

The world has gone an entire calendar year without a single coup attempt only once since the First World War, and that was in 2007. However, that year did not prove to be the dawn of a new coup-free era in global politics. In fact, there were more coup attempts in the three years that followed 2007 than there were in the three years that preceded it. So would a coup-free 2017 be another anomaly, or might it be an important milestone in international politics? We can dig deeper into the CoupCast data to understand whether this would be a stroke of good luck or the outcome of meaningful change in global politics.

Social scientists can point to a number of reasons for the recent decline in coup risk. First among them is a systemic, though incomplete, shift away from explicit global superpower rivalry toward an international system more geared toward democratization and respect for state sovereignty. Great power politics endure and recent foreign invasions demonstrate a continued willingness to violate these new norms, but foreign powers are far less likely to explicitly support military conspiracies in other countries. Instead, international condemnation of coup activity is increasingly common. Regional security organizations are significantly more likely to preemptively intervene where coup risk is high (as in Haiti) or rapidly condemn emerging coup attempts (as in Burkina Faso or The Gambia).

Second, the public is much more likely to support a radical and unconstitutional regime change when economic conditions are very poor. Poverty makes people more willing to accept abrupt regime change. This increases the chances that a coup attempt would gain popular support, and, in turn, the likelihood that potential coup plotters would risk an attempt in the first place. Though income inequality continues to be a pervasive problem in most societies, people are wealthier and healthier than ever before.

Twenty years ago, 4 billion people lived in one of the 115 countries with a per capita gross domestic product below USD $5,000 (inflation-adjusted). Today, fewer than 2 billion people live in one of 75 countries with economies below this threshold. Higher incomes have resulted in substantially improved living conditions. Relative to levels in 2000, infant mortality rate, perhaps the most indicative national-level measure of social well-being, has fallen in 186 of the 188 countries for which complete data are available.

And finally, most coups occur in cyclical traps because people are more likely to accept coups in countries with more recent histories of coup activity. As we have seen in countries with long traditions of military interference in politics, past coups normalize and legitimize future coup attempts. Coups become unthinkable in countries that have not had one for generations. The immediate drop in coup risk that coincided with the end of the Cold War is further in the past than it was in 2007.  Legacies of former coups are less relevant in many countries. This suggests anti-coup norms should be stronger than ever in most of the world.

AN IMPORTANT STEP TOWARD PEACE AND GOOD GOVERNANCE

Improvement in all of these areas means there are very good reasons to believe we are moving toward a world in which coups will become much less common. A coup-free year could be an important step toward this goal, as it would help break cyclical coup traps, throw fewer countries into new economic crises, and perpetuate norms of democratization, civilian rule, and transparent leader turnover. Every time a high-risk country like Haiti avoids military intervention in politics, global anti-coup norms are strengthened and leaders who rise to power in coups become further ostracized. Fundamental shifts like this increase the chances that 2017 could be the first of many more coup-free years to come.

The CoupCast estimates the risk of a coup attempt in every country every month. For more information about how the CoupCast works, see our methods page. All of our data are available here.