In April 2018, Hailemariam Desalegn handed over the reins as prime minister of Ethiopia to Abiy Ahmed Ali following nationwide protests and unrest in 2015 and 2016. Ethiopia has had a troubled history with political violence, and these turbulent years under Desalegn were no exception. In the lead-up to Desalegn’s departure, Ethiopia experienced widespread state repression of dissent, which included allegations of extrajudicial killings, the firing of live ammunition into crowds of protesters, and arbitrary arrests by agents of the state. What may the resignation of Desalegn mean for Ethiopia going forward? So far, new leadership has brought a renewed effort to resolve the military dispute between Ethiopia and Eritrea  and may help promote an end to Ethiopia’s domestic insurgencies. Could these positive developments also influence violent state repression in Ethiopia as it continues toward democratic reform?

The discipline of political science has attempted to more rigorously study the causes of violent state repression. Work has been conducted on the influence of trade agreements and treaties, leader security and stability, and specific regime typologies, but little has been done to address how instances of leadership change during both elections and nonelection events may change subsequent repression. To address this gap, we utilize exploratory data analysis and visualizations to demonstrate patterns in state repression following leadership change. We define state repression as the threat, or act, of using physical or institutional force against an individual.

This analysis focuses exclusively on violent repression. While this is not the only type of repression that victims may face, it is an important dimension to consider and is likely correlated with the use of nonviolent repression. Because of this, the following analysis is more exploratory than authoritative and simply seeks to illustrate how two unique sources of data may illuminate the potential relationship between leadership change and violent state repression. This analysis utilizes data about violent repression conducted by the state against civilians from 1989 to 2017. We also make use of our own Rulers, Elections, and Irregular Governance (REIGN) data set to quantify leader tenure and change. 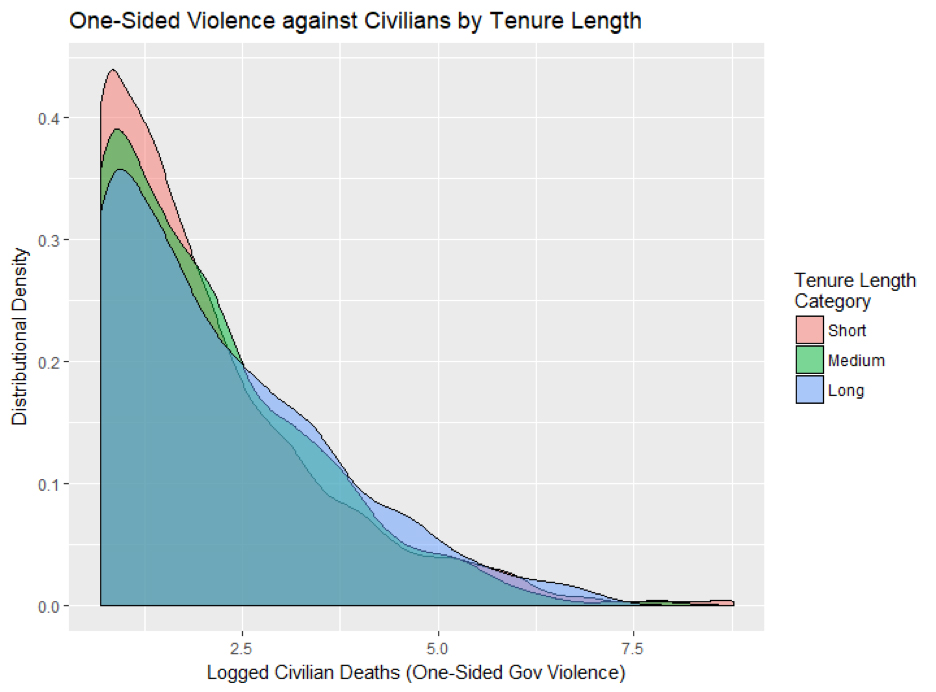 The above plot shows the density of one-sided civilian deaths attributed to state actors across tenure length categories. The data correspond to individual leader-months and track variation within and across leaders over their respective tenures. The data show that leaders experiencing a long tenure (nine or more years) more densely cluster around higher rates of violence against civilians. Short (less than four years) and medium (four to eight years) tenures cluster more around less overall violence against civilians and make up a smaller proportion of the variance for logged values of violence above 2.5. In essence, this tells us that one should expect more violent state repression in more established leader periods and less in the short and medium run of a leader’s respective tenure. This implies that leadership turnover may be an important avenue for mitigating violent repression, but what happens to violence during leadership change?

The plot below shows the median value of violent state repression (black horizontal bars) by leader exit status broken down by regime type. Status quo means the leader has not changed in a given month, while leader change (elections and outside elections) indicates that a leader has changed in the previous month. The data suggest three patterns concerning leader status and violence against civilians. First, autocracies experience higher rates of violent repression relative to their democratic counterparts. This finding is not surprising as the audience cost of violent repression is typically higher in democratic systems where voters can retaliate against rulers to varying degrees. Second, the avenue by which leadership changes seems to have an inverse relationship with median levels of violent repression. When a leader leaves following an election, violent repression decreases. When a leader leaves outside of an election event, it subsequently increases. Finally, this second pattern appears for both democracies and autocracies, albeit at different relative levels. 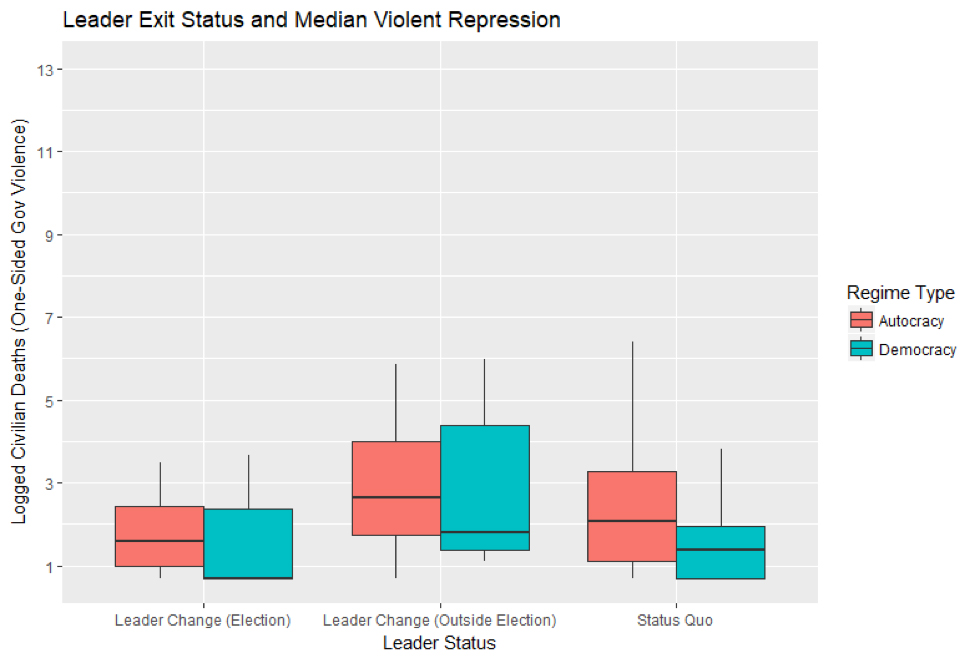 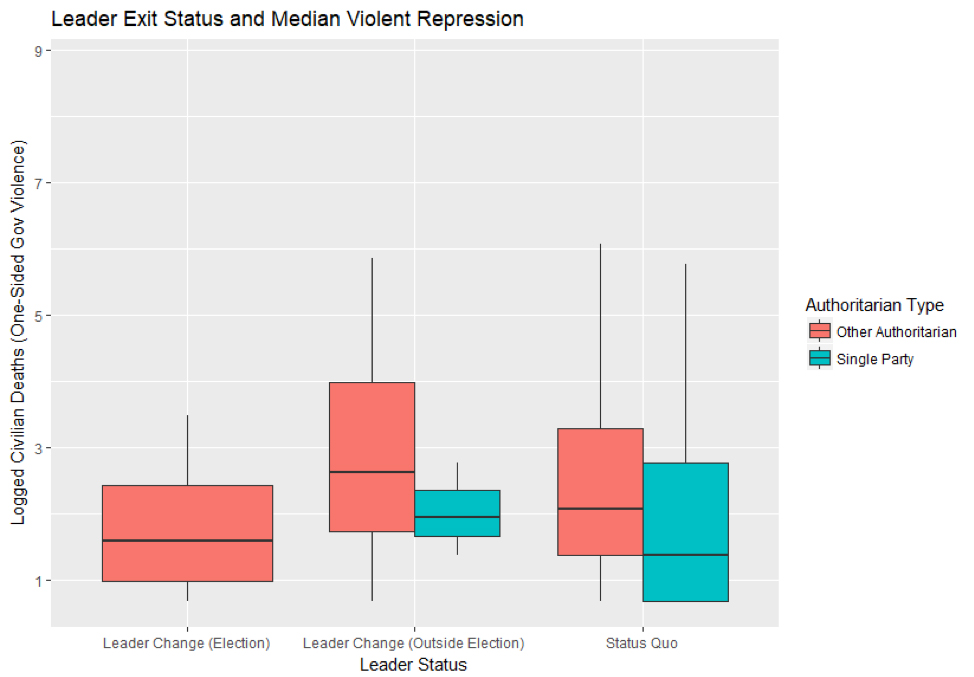 One should still be wary of a potential uptick in violent repression, but the level of violence may be less than one would expect in other authoritarian regimes. Ethiopia is also scheduled to have a parliamentary election in 2020. If Abiy Ali goes ahead with democratic reforms and the single-party system opens up, Ethiopians may be able to look forward with optimism. While much can happen in the next year, it seems that an increasingly democratic trajectory may help bring an end to a troubled history of violent political repression in Ethiopia.