Zimbabwean President Robert Mugabe at the swearing in of his sixth term in office in 2008. Photo credit: ALEXANDER JOE/AFP/Getty Images

Back in May we wrote that 2017 might end without a single coup attempt, becoming only the second year in a century without an attempted coup d’état. A coup in Zimbabwe on November 15 proved 2017 will not be coup-free after all.

The army placed Zimbabwe’s 93-year-old leader Robert Mugabe under house arrest, declared on state television that it is temporarily taking control of the country, and deployed military personnel and equipment to the capital. Mugabe’s wife, Grace Mugabe, allegedly fled Zimbabwe for Namibia.

Why did the coup happen?

The coup was precipitated by a succession struggle within the government. Right before the coup, Vice President Emmerson Mnangagwa, widely supported by the military and considered to be a natural successor to Mugabe, was sacked by the government and fled the country. It is believed that Mugabe was paving the way for his wife, Grace Mugabe, to take over.

In Zimbabwe, as in other revolutionary states like Cuba, former revolutionary military leaders like Mugabe and Mnangagwa continue to be seen as the rightful leaders of the state, despite decades of economic turmoil and authoritarian political practices. This perception is especially strong within the military. The rise of a non-revolutionary like Grace Mugabe challenges this belief. This threat motivated the military to strike.

You can read more on the historical context surrounding the coup here.

Why didn’t we see it coming?

While coups are often triggered by uncertainty surrounding leader succession, the Zimbabwe coup is really special: based on historical data, it was highly unlikely to happen.

Our REIGN dataset collects information on every coup and coup attempt, tenures and personal characteristics of world leaders, the types of political institutions and political regimes in effect, and election outcomes and election announcements for each month from January 1950 to the present.

The data shows that, historically, coups are very unlikely to happen against long-serving leaders. Leaders are more likely to be overthrown at the beginning of their tenure before they have entrenched themselves and their supporters in positions power. Few leaders survive in office as long as Robert Mugabe, and this means we have very few points of comparison. That being said, Mugabe has survived more dire political crises and lasted nearly 40 years in power before being ousted, nonetheless.

According to the data, out of almost 500 coups since 1950, only two, excluding the current Zimbabwe coup, happened to leaders who have been in power for more than 400 months (around 33.3 years). Alfredo Stroessner in Paraguay was ousted by a coup in 1989 after 35 years in power. A coup also took out Haile Selassie in Ethiopia in 1974 following 33 years in power.

More recently, Gnassingbe Eyadema, who had been the president of Togo for 38 years, was replaced by his son by a military order immediately after his death in 2005. The event is formally considered a coup because the military intervened to preclude a constitutional succession, but Eyadema could hardly be considered to be a sitting incumbent as he died hours before the military acted. This case considered, Mugabe is now the oldest leader to suffer a coup attempt since 1950. 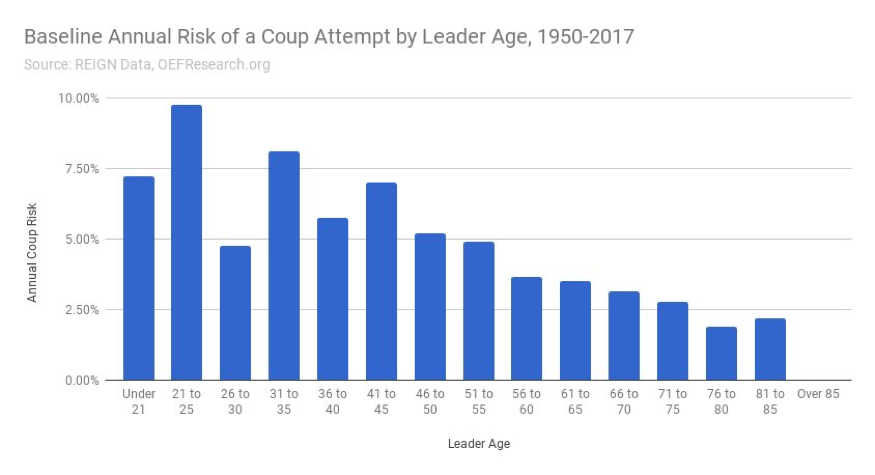 When looking at the data by the age of the leader, rather than leader tenure, a coup against Mugabe was even less likely. Since January 1950, a leader over 85 years old has never suffered a coup attempt.

The oldest leader to have been ousted by a coup since 1950 has been Habib Bourguiba, the first president of Tunisia, ousted by a coup in 1987. Three leaders were ousted at the age of 82: Alberto Demicheli of Uruguay, the above-mentioned Selassie of Ethiopia, and, most recently, Hosni Mubarak in Egypt. With this coup, Mugabe earns the unhappy distinction of being the oldest leader unseated by a coup. 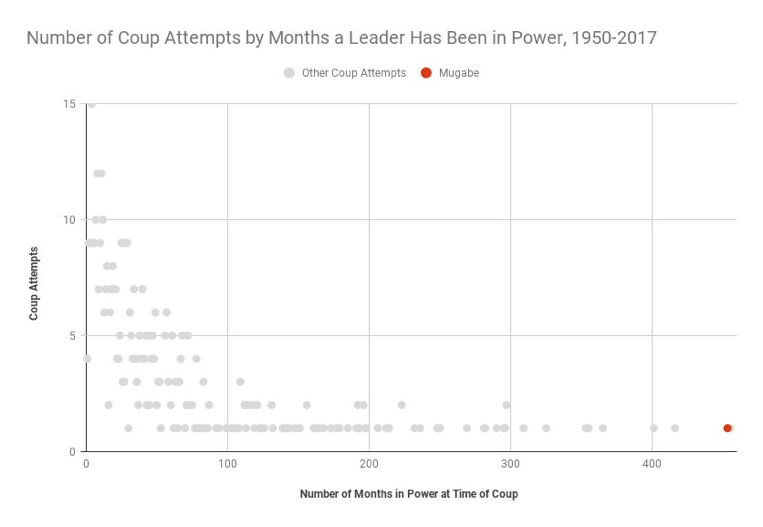 How has coup risk changed for Zimbabwe over time?

While the Zimbabwe coup is certainly out of the ordinary based on historical data, the length of a leader’s tenure and his or her age are not the only factors that determine coup risk. Our CoupCast model uses REIGN historical data and machine learning to predict a likelihood of a coup attempt in any country at any given month.  The model takes into consideration many other variables when determining coup risk, including election data, regime type data, economic and climate indicators, as well as other characteristics of a leader, such as gender and a military career.

According to the model, Zimbabwe’s coup risk has never reached zero, or even the regional average, despite an increasing length of Mugabe’s tenure and his age. The coup risk in Zimbabwe has been overall on a declining trend since Mugabe assumed power in 1980, consistent with our expectation that longer-serving leaders face a lower coup risk. But, even at its lowest, the risk of a coup in the country has still been higher than the sub-Saharan average. 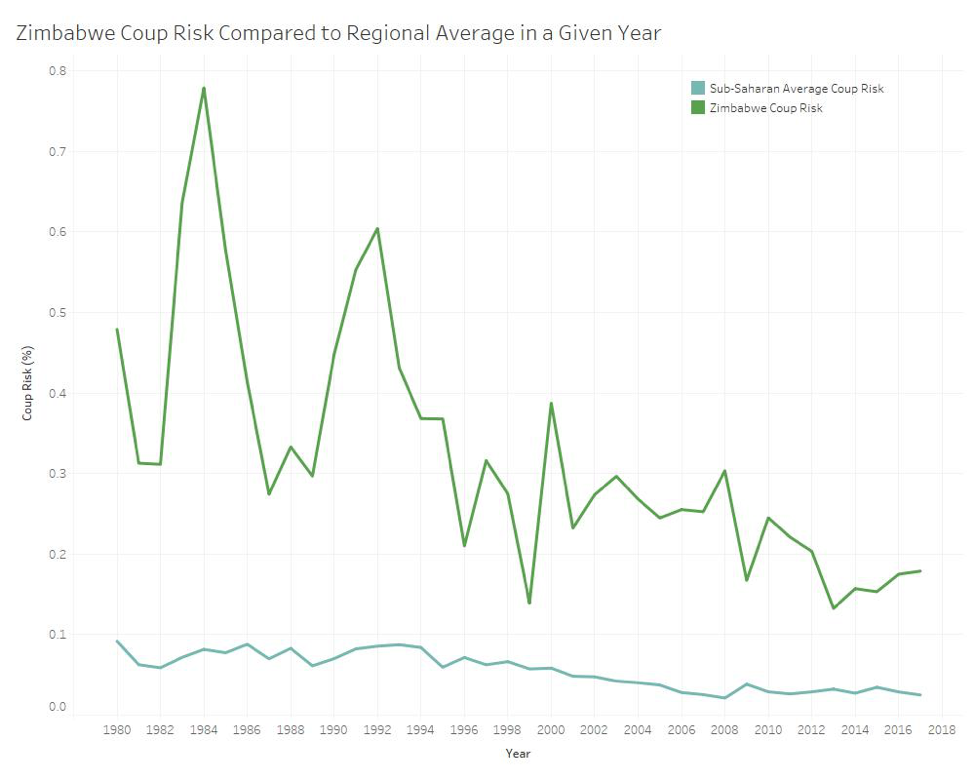 As our colleague has written, Zimbabwe has always been a relatively unrepresentative state that has relied on security services as a tool for cracking down on dissent.  Regimes like this are inherently less stable than fully democratic regimes: it is relatively easy for elites to co-opt this kind of system and take the reins of power.

In addition, the developing succession fight created a context where the potential losers (Mnangagwa in this case) were incentivized to take action quickly to prevent consolidation of power by Grace Mugabe.  Mugabe underestimated the opposition, which is a common risk in dictatorships where popularity is feigned and unknown. This is a relatively frequent trigger of a coup. For example, in Mauritania in 2008 President Abdallahi dismissed multiple high-ranking generals from office only to be overthrown by them later that day.

Our coup risk model takes regime type into account. But, the model does not capture the sackings of important members in a leader’s cabinet. The model also certainly weighed Mugabe’s tenure more heavily than the real-life coup plotters did.  The risk of mathematical modeling is that it will capture the aggregate trends, but statistically unusual cases like this coup are less easily predicted.

This coup was unexpected both for coup observers and the Mugabe regime, and sets a new precedent for deposing older leaders.  This is a reminder to us, and to other institutions interested in stability, to watch for changes in the underlying factors contributing to the risk of instability as well as the stabilizing elements involved: things can change quickly and surprise us all. Four hundred fifty-three consecutive months of successfully holding onto power and thwarting political opponents does not guarantee one a 454th month in office.