For every successful or attempted coup d'état there are dozens if not hundreds of events that are described as such. Leaders use the word "coup" to undermine their political opponents, delegitimize legal processes that they do not like, or even justify repression and state-sponsored violence. Opposition movements and political dissidents accuse elected leaders of coups when they amend constitutions, manipulate elections, or expand their own powers. Further complicating matters is the fact that journalists sometimes conflate the phrase "coup d'état" with similar terms like "coup de grâce" (a final merciful blow to a leader who was already struggling), "coup de force" (a sudden show-of-strength, often through violence), "coup de main" (a swift and decisive strike), and the oxymoronic "constitutional coup."

To predict coup attempts, we need to define them in a very precise way. CoupCast uses information from past coup attempts to predict future coup attempts, so including non-coups in the dataset will generate bad predictions. We attempt to cut through the contentious political rhetoric surrounding coup activity with the following definition:

COUP D'ÉTAT:
AN ILLEGAL CONSPIRACY FORMED BY A COUNTRY'S MILITARY OR GOVERNMENT/SOCIAL ELITES TO REMOVE AND REPLACE THE INCUMBENT EXECUTIVE LEADER.

We unpack this definition to identify five conditions for a coup attempt:

First, the way the leader is removed from power must be involuntary and illegal. Constitutional impeachments are not true coups because they remove leaders by an established legal process. This means impeachment trials that have been ruled constitutional are not coup attempts. For this reason we do not share the view that the impeachment of Brazilian President Dilma Rousseff constitutes a coup attempt. Similarly, we do not believe the removal of Paraguayan President Fernando Lugo in 2012 qualifies as a coup attempt.

Second, coups are secretive and premeditated plans shared by an exclusive group of plotters. Most coups are organized at the highest military ranks, though some emerge within the cabinet or ruling committee. Small groups of junior officers also execute coups, though these are less common and less likely to succeed.

Spontaneous protests, civil wars, and other unorganized large-scale movements are not coups, though leaders often call them coups to further delegitimize them. South Sudanese President Salva Kiir sometimes discredits the movement against him by framing mutinies and rebel attacks as coup attempts. In this way, he can frame each battle around the opposition's failure to remove him and propagate a narrative that portrays him as a resilient survivor. Unproved allegations of elite-driven coup plotting are also used to undermine popular protests against leaders, as they were by supporters of ousted Serbian President Slobadon Milosevic following the massive public uprising that removed him from power. This is not to say that coups cannot be both large and bloody---Turkey's failed coup in July 2016 was both. However, coups start as secret plots. They are not spontaneous. They focus on the goal of removing the leader, rather than secession, political reforms, economic policies, etc.

While foreign operatives may support coups, foreign efforts must complement the actions of domestic actors or exiled domestics who are central in the planning and execution of the plot. Foreign invasions and covert actions are not coup attempts.

Admittedly, the line between foreign overthrows and domestic coups has been blurred by superpower interventions in the politics of other sovereign states. We consider events to be coups if foreign governments worked closely with domestic actors. In Panama, for example, we consider the failed effort to remove Manuel Noriega in October of 1989 to be a coup attempt. The U.S. government encouraged the attack, but it was led by Panamanians. His ouster in December 1989 was not a coup because it was a foreign invasion using thousands of American troops. The Panamanian opposition played a less consequential role.

We do not include foreign overthrows, such as the U.S. invasion that removed President Manuel Noriega in Panama in December 1989. 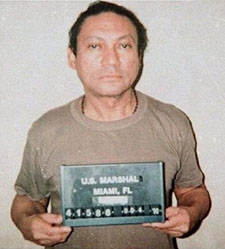 #4 COUPS ARE INTEDED TO REMOVE AND REPLACE THE LEADER

Any coup plot should have two goals: to remove the incumbent and to replace the incumbent with the person of the plotters' choosing. This is what makes coups different from other kinds of plots, such as assassinations. Leaders are often assassinated in coup plots, but what differentiates coups from assassination plots is a coup plotter's work is not finished unless the plot ends with the installation of a new chosen leader. Infamous killers like Yigal Amir (Israeli Prime Minister Yitsak Rabin) and Lee Harvey Oswald (American President John F. Kennedy) were assassins, but they were not coup plotters.

By this same condition, so-called "self-coups" or executive power grabs are not real coups. Leaders behind these kinds of events have no intention of replacing themselves. Coups aim for leader replacement, not leader empowerment.

#5 COUPS TARGET THE LEADER AT THE TOP

Finally, we only consider an event to be a coup if the target is the most important leader of a sovereign country. We would not try to predict the recent "coup" within the leadership of the Nigerian terrorist group Boko Haram. Nor would we try to predict conspiracies to remove governors, defense ministers, or admirals. Coups target the individual who serves as the de facto head of government.

A coup attempt requires clear and uncontroversial signs of execution, such as actual attacks, intercepted arms or mercenaries, or plotter announcements broadcast by the media. If there are unsubstantiated rumors of events that meet all of these conditions, yet no overt signs of execution, then we consider the event to be a coup allegation.

We follow the precedent set by coup researchers and consider coups to be successful only if the leader chosen by the coup plotters survives in power for at least one week. Many coups are successful for hours or even a few days, only to collapse once loyalists mobilize to arrange a counter-coup. Once coup leaders survive the first couple of days, they are far less likely to be dislodged from power.

Fortunately, our working definition of a coup d’état allows us to adapt the excellent coup dataset compiled by Jonathan Powell and Clayton Thyne. Our own coup list, which makes minor changes to this list and adds a coup list for 1920-1950, is available on our data page.

Photo Description:
In Brazil, former President Dilma Rousseff frequently used the word "coup" to delegitimize her impeachment, but involuntary removals by legal processes like impeachment do not meet our definition of a coup attempt.