On Sunday a group of armed men attempted to attack and steal weapons from a Venezuelan army base. The attack was quickly thwarted, as all those involved were killed, captured, or fled the scene. The men have been identified as either armed forces defectors, paramilitaries, or terrorists.

This incident was one of several dramatic developments in a week which saw the beginning of work by the controversial constituent assembly, the detention of prominent opposition leaders and the removal of President Maduro's ally turned critic Attorney General Luisa Ortega Diaz. Nascent signs of organized armed resistance to the Maduro government will elicit commentary and dire predictions from Venezuela watchers.

But for real insights on the future of the Maduro regime and the potential for a violent change of the status quo, perhaps they should be looking less at Venezuela’s chaotic politics and more at the nation’s oil production numbers.

Political scientists have empirically demonstrated a link between natural resource endowment (particularly oil) and authoritarianism. Theories regarding this link revolve around two causal mechanisms which can be simplistically characterized as the carrot and the stick. The carrot is the ability of oil rich authoritarian states to levy little in taxes and spend lavishly on social services and public goods, effectively buying off the population’s desires for meaningful political representation. The stick is the resources that oil provides such states to build massive internal security apparatuses which can be rolled out in the event of political mobilization. These mechanisms effectively link the survival of authoritarian systems with the continued largess of oil revenue. Unfortunately for President Maduro, Venezuela’s oil sector (and thus the economy as a whole) has fallen on hard times, and that has called into question the grand bargain between the United Socialist Party of Venezuela (PSUV) and its people.

The root of the unfolding economic collapse lies in years of mismanagement of Venezuela’s oil wealth, which constitutes 95% of the country’s export revenue. Rather than responsible savings and investment aimed at increased productivity and diversification of the economy, Chavez squandered oil revenue on subsidies and outright gifts for his political base in order to ensure electoral success. These policies appear to have had little if any benefit for the Venezuelan economy and the welfare of its people in the long term. This strategy of purchasing political popularity could continue to function in the context of high oil prices, but with oil prices at their lowest point in a decade, and likely to remain low in the near to medium term, the system appears to be on the verge of collapse.

While global forces like the sharp fall in crude oil prices accelerated Venezuela’s decline, the country was concurrently and irrevocably damaged by the strike-driven collapse of the state-owned oil company PDVSA. Despite having the world’s largest proven petroleum reserves, Venezuela’s annual petroleum production rate has fallen to just 2.4 million bbl/day (2016 data), which is its lowest rate since 1990 and more than 1 million bbl/day below the peak reached as Hugo Chavez took power. Analysts predict production will fall further to 1.7 or 1.8 million bbl/day by the end of 2017. 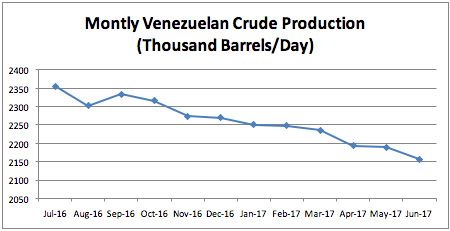 As a result, Venezuela’s economy has shrunk by an estimated 27% since 2013 and the state’s finances are in shambles. The state is often unable to provide basic services and the government work week has been cut down to two days in an effort to save electricity. The central bank has simply stopped publishing basic economic indicators. However, perhaps the most ominous sign for the state of the country’s finances and the long-term stability of the regime is the fact that it is resorting to borrowing at exploitative terms in order to continue to function at the current level and meet existing debt obligations as they come due. Most recently, the government has been shopping $5 billion worth of bonds through a Chinese intermediary for $1 billion. This means the Venezuelan government would be on the hook for the $11 billion in repayment over the next 30 years in order to get an immediate $1 billion. This is in addition to an earlier bond sale to Goldman Sachs at a less extreme but still highly discounted rate. The riskiness of these financial maneuvers is highlighted by the fact that most securities on offer are not being registered through the organizations which are typically used for such transactions. And, for the first time, investors are beginning to question the country’s ability to repay, as Venezuela has recently fallen behind in scheduled repayments of some loans. This would seem to imply the regime is thinking only of short-term survival and making little attempt to plan for the long-term economic health of the nation. This misinformed fiscal policy has had devastating impacts on the average Venezuelan in the form of massive inflation and shortages of basic supplies.

In addition, there is the very real potential for Venezuela to reach actual hyperinflation, an extremely rare event that has only occurred 56 times globally. Even without hitting the technical definition, inflation levels in Venezuela are astronomical. Inflation in 2016 hit 800% and shows no signs of slowing in 2017. Inflation of this magnitude has several debilitating micro and macroeconomic impacts. At the micro level, individuals and families see their savings disappear and their standard of living declining as wealth that is denominated in bolivars is wiped out. This in turn leads to declining national economic productivity as workers eventually cease showing up at jobs whose wages provide nothing in terms of buying power. The government has reacted not by attempting to improve economic fundamentals or by combatting inflationary pressures, but by printing more money. In January the government began issuing 20,000 bolivar notes (which are still only worth $5.30) because the previous highest denominations available had become effectively worthless.

Venezuelan consumers also have had to contend with debilitating shortages. A lack of foreign currency reserves for the importation of basic goods and medicines is further compounded by the Venezuelan system of subsidies. Price caps put in place with the intention of ensuring that all Venezuelans could affords basic foodstuffs have backfired, creating market disincentives for production. As a result, Venezuela’s production of grain, meat, and vegetables has declined by 80%, 40% and 18% respectively, further contributing to shortages and food insecurity.

All of this has seen the development of a humanitarian crisis on a scale rarely seen in an upper middle income country. 70% of the nation’s population now lives below the poverty line. One in three Venezuelans report eating two or fewer meals a day (a 300% increase over 2015) and 75% of people reported involuntarily losing weight in 2016, with the average loss being nineteen pounds. An estimated 25% of children are malnourished. There is also a lack of basic medical supplies, and maternal mortality increased 66% in 2016. Unfortunately, there appears to be little room for improvement of the economic/humanitarian situation under the current government, as implementing necessary economic reforms would in effect be admission of decades of economic mismanagement.

Venezuela’s economic woes mean the regime cannot provide for the basic needs of its people, much less provide the oil-funded benefits which were the foundation of its hold on power. This has resulted in increased political contestation from a population still deprived of real political representation but no longer receiving the material benefits of oil revenues.

In stark contrast to the near-complete economic collapse, Venezuela’s political system has proven to be resilient despite nearly daily clashes between protestors and security forces. How has Venezuela avoided major political change and why does the government continue to disprove warnings of its imminent demise?

The Venezuelan government is a highly personalized system that uses oil rents to purchase the loyalty of those who possess the means or influence to challenge the system. The choice is clear for the Venezuelan military and political elite. Loyalty to Maduro is rewarded, while those outside of the inner circle are likely to be subject to some of the same economic insecurity suffered by Venezuela’s masses. This “loyalty norm” effectively insures that Maduro’s inner circle will not defect.

There have been many, many warnings of a coup in Venezuela, but they have all been wrong because this loyalty norm has not been sufficiently appreciated. Africa’s most stable dictatorships are similarly personalist and similarly oil-dependent (Gabon, Equatorial Guinea, and Angola, for example). We see a similar pattern among oil-rich personalist systems in central Asia and even in the Middle East, where it took foreign invasions to dislodge Qaddafi and Hussein. As long as there is such a clear juxtaposition between the comfort of those within the circle and the misery of those outside it, it is unreasonable to expect an elite-led coup d’état anytime soon. Maduro reinforces this loyalty norm by periodically rotating high-level military officers and relying on Cuban reinforcements for his own security.

As we have seen in other similar political systems, the real threat will be from hostile foreign activity, or popular protests that grow much more organized and united than we have currently seen. A few factors make this somewhat unlikely:

Despite the seeming stability of the political system Maduro and Chavez have established, events of the coming months may put enough pressure on the regime that it is forced to resort to even more overt repression or real concessions in order to break through the current state of paralysis.

One of the many events which could exacerbate the current crisis is if and when the government runs out of reserves or begins to default on loans to major creditors. Such a situation would mean the government would have difficulty importing basic humanitarian supplies like food products and medicine. This would deepen the humanitarian crisis and increase pressure on the regime. It would also mean further isolation for a state already beginning to be viewed with skepticism in international financial markets. Earlier this year it was reported that Venezuela had only $10 billion in reserves. This is further complicated by the fact that the majority of this is in gold, hampering liquidity and ease of payment. Low reserves are not as big a problem if the country is not particularly dependent on imports for basic goods and economic inputs or has low levels of debt. Unfortunately Venezuela is both import-dependent and heavily indebted.

Venezuela has billions of debt payments coming due over the course of 2017. A closer look at the scheduling of these payments may help provide some insight into when the financial pressure will be greatest. The government survived an unusually high month of debt payments in April and is in the middle of a brief respite. That said, it will likely come under intense pressure once again in October-November when over $3 billion in payments come due. If financial hardships are to put pressure on the regime and help force political change, late fall may be the key period of time to keep an eye on.

These scheduled payments will coincide with the recommendations of the upcoming constitutional assembly—recommendations that are very likely to enrage the opposition movement. If Venezuela is going to suffer rapid political change in 2017, it will probably occur sometime in the fall when these economic and political pressures peak simultaneously. Until then, the status quo is likely to continue without major political change.

In the long term, the survival of the Maduro government may come down to oil. Decreased production and low prices have undermined the state’s ability to use social spending as a carrot, so it has had to resort to the stick, but reliance on repression from the security services may not be enough to sustain the PSUV’s hold on power. If global oil prices recover, or production can be increased substantially, the government may have the resources to pull the country out of its twin humanitarian and political crises and maintain power. If prices or production fall further, the regime may not have the resources necessary to maintain the current security apparatus, and Maduro’s last tool to cling to power may crumble beneath him.