This blog is the second in a series focusing on a research project on the impact of National Action Plans (NAPs) to implement UN Security Council Resolution 1325 (UNSCR 1325) on the interaction between governments and civil society. The joint project of the One Earth Future Foundation and the Institute for Inclusive Security is set for release in 2016.

As we continue to collect data, we’re paying closer attention to the levels of collaboration between civil society organizations (CSOs) and the state (including the military) as a result of NAPs. Research on this particular component is currently scarce. As more countries prepare to draft these plans or revise existing NAPs, this report will provide examples and offer timely recommendations that policymakers and civil society can use to make their plans an important tool to effectively implement UNSCR 1325. 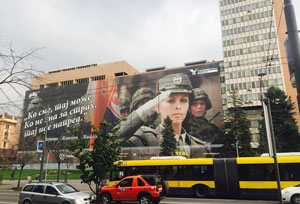 For the second field trip of this research project, we traveled to Serbia, which became the second post-conflict country in the Western Balkans to launch a UNSCR 1325 NAP in 2010. Since then, despite many challenges, the country has successfully increased the numbers of women in its security sector. With the expiration of the NAP at the end of this year, Serbians are reflecting on opportunities to further strengthen women’s participation in a variety of areas relating to peace and security. In Belgrade, our research team talked to a variety of stakeholders from both the state and civil society.

Before discussing in more detail some of our initial findings, it is important to contextualize the NAP and to note the dominant role of civil society, particularly women’s organizations, in Serbia. The dissolution of Yugoslavia and the subsequent conflicts in the early 1990s gave birth to many CSOs in the Western Balkans which very actively called for an end to the war. UNSCR 1325 therefore served as a common denominator for different CSOs to bridge ideological gaps and political agendas. The motivation of CSOs to jointly push for a NAP is a direct outcome of Serbia’s troubled past and its role in the Yugoslav Wars. However, the government’s commitment for the adoption of the NAP, as some CSO representatives suggested, stems from its obligation as a signatory to several human rights documents as a precondition for joining the EU and attracting donors. 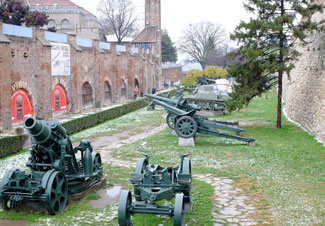 Consequently, our findings suggest a diversity of perceptions on the impact of the Serbian NAP.

For example, the wish of CSOs and some government officials to increase the recognition of women’s voices and their inclusion in decision-making stands in sharp contrast to the government’s pride of simply having raised numbers of women in the security sector and in politics. So, while the adoption of the NAP in itself was a great success, the glass ceiling has not been broken and not many women have been able to attain leadership positions. These diverging opinions are reflected in the relationship between the state and civil society which continues to remain strained, and the reasons for that are manifold.

First, Serbia has over 100 national action plans and national strategies regarding education, health, judiciary, etc. Only some of these documents have a gender component. Currently, the government’s efforts to mainstream gender are exemplified by a new Draft Law on Gender Equality. However, there is a tendency in Serbia to treat efforts to enhance gender equality and to implement UNSCR 1325 separately. In other words, the application of the women, peace and security agenda is narrow and focused on the security sector. The Ministry of Defense (MoD) is currently the only government institution actively implementing the NAP, at least those paragraphs that pertain to the security sector. Provisions of the NAP to empower women and to elevate their roles in decision-making bodies has been neglected.

Second, CSOs—particularly feminist groups—are still looked upon with suspicion by many in Serbia. The old wounds of the conflict have not yet healed, and coming to terms with the past has not undergone a major catharsis. Talking about the war and war crimes in Serbia is still a taboo and many CSOs continue to demand that the state take greater responsibility for what happened during the wars. The relatively new but very vocal civil society reports that they are weighed down by a legacy that hampers inclusivity; some feel they are considered as traitors for their activism and the demands they place on the state. While distrust and divisions have not yet been resolved, there are voices both in government institutions and civil society that are working to break the ideological mold. Nonetheless, recurrent changes in governments illustrate the volatility of forging relationships between government and civil society that have the potential to positively influence the implementation of the NAP. 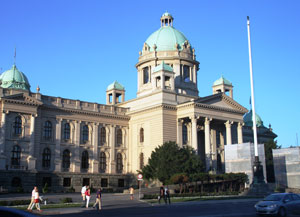 Lastly, while the national government shows strong commitment to the inclusion of CSOs, it has a tendency to favor particular CSOs over others. In addition, some civil society interviewees suggest that government does not streamline their demands properly. In other words, without validation of the NAP when the document was completed in 2010, collaboration between the state and CSOs oftentimes has reached a stalemate, especially since the adoption. CSOs are not represented in relevant government coordination bodies, thereby limiting their ability to monitor the implementation and holding the state accountable. However, with the current NAP expiring at the end of this year, a revised NAP on the way, and a growing understanding that this NAP needs to be localized, a window of opportunity is opening for renewing state-civil society relationships.

These and subsequent findings will help shape our understanding of 1325 NAPs and the ways in which countries can improve the mechanisms to implement their policies at the local level. NAPs represent the most promising tool for realizing the objectives of UNSCR 1325, since they aim to translate global goals into concrete national plans. Unpacking their implementation can help governments and civil society actors understand the effect they are having, and could ultimately strengthen the chances that the stipulations of 1325 will succeed.

The use of NAPs is showing impact in many countries, albeit with mixed results, and we will continue our research and data collection in the remaining two countries to create a comprehensive assessment. We look forward to sharing updates on our findings. Follow the One Earth Future Foundation on this website, on Twitter, or on Facebook; and the Institute for Inclusive Security at inclusivesecurity.org, on Twitter, or on Facebook for updates.