More than 1,600 migrants have died in the Mediterranean Sea in 2015. The month of April alone accounted for an estimated 1,100 dead in three separate accidents involving over-crowded vessels ferrying people fleeing the conflicts in Middle Eastern and Northern African countries for the safety of Europe. These deaths are taking place in the context of an increasingly tense debate about refugees and migration in Europe, but this developing humanitarian crisis is not immediately a question of refugee policy or support for immigration: while these debates continue, the issue of stopping deaths at sea is first and foremost a question of maritime security and the enforcement of the rule of law at sea.  Ensuring safety in the Mediterranean will require a better and more systematic approach to supporting maritime security and the coordination of multiple different actors in the short term, followed by more long-term engagement with the underlying root causes of the problem.

The world has a clear model for how these goals can be accomplished. Counter-piracy activities off the Horn of Africa have been notably effective. In confronting Somali piracy, the international community faced a problem with many similar characteristics to the problem of unsafe migration in the Mediterranean: like the refugee crisis, Somali piracy was a problem materializing at sea but rooted in conflict ashore, one that impacted the international shipping industry, and one which lacked a clear single entity responsible for dealing with it.  In the eight years since the rise of Somali piracy, the world has effectively coordinated a response that has resulted in the collapse of piracy in the area.  Some of the key lessons from this may apply directly to stopping the threat of mass drownings in the Mediterranean. 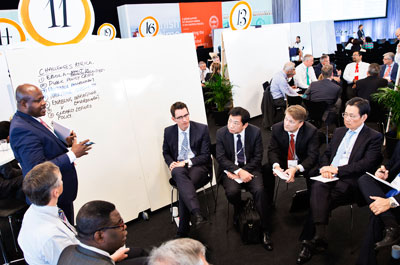 The overarching lesson from Somali piracy is that maritime safety and security requires a coordinated, multi-stakeholder driven response. The sea is too large and the capacity of interested actors too specific to allow for any one state or private sector actor to effectively take responsibility for solving the problem. Instead, a coordinated response that brings in every stakeholder concerned about the issue may be the critical element in addressing the problem. In the case of the refugee crisis, this may invoke actors including the maritime industry, international organizations, the EU, and states and regional actors from the Mediterranean coast.

More concretely, three specific recommendations come out of the experience of piracy: what is needed are short-term measures for information sharing and operational coordination among actors, training and capacity-building programs to unlock the value of the maritime industry, and the use of multistakeholder coordinating mechanisms to develop strategic plans and, in the longer term, developing solutions that address the root causes of the crisis.

In the first case, the Shared Awareness and Deconfliction (SHADE) mechanism has been a critical element of the response to piracy that has improved the effectiveness of counter-piracy actors.  By creating a venue in which different navies and industry actors operating in the Indian Ocean can share information about their operations and activities, SHADE has allowed for more effective coordination without direct engagement at the political level. SHADE focuses on “unity of purpose over unity of command,” and a similar program for the Mediterranean focused on migration could improve information sharing and maritime situational awareness for navies, coast guards, and industry ships operating in the area.  Initial steps in this direction have already been developed, as EU states have agreed to closer coordination to support activities in the Mediterranean. Alongside this tactical coordination, one key element of the response to piracy off the horn of Africa was the presence of a venue for institutional coordination and joint planning for addressing piracy at the strategic level.  The Contact Group on Piracy off the Coast of Somalia (CGPCS) has functioned as a venue in which all interested stakeholders can come together to coordinate their activities with the goal of ending piracy.  The CGPCS is not limited to states, but incorporates NGOs and industry in the planning, and also focuses on addressing the root causes of piracy ashore as well as suppression. A similar approach to the migration crisis will create a venue for collaboration that incorporates both short-term planning and response to migration as well as engagement with the long-term solution to the refugee crisis ashore.

As a part of this multi-stakeholder approach, industry programs for vessel self-protection have been an important part of reducing piracy. While the international maritime industry is not the target of migration, as it was for piracy, it is nevertheless directly implicated in the response to migration: industry vessels have served to rescue migrants from several accidents in the Med, and in the case of the 18 April sinking it appears that the presence of a merchant vessel served as a precipitating incident for the capsizing. The International Maritime Organization (IMO) has developed several programs for supporting migrants and peoples rescued at sea.  These guidelines, similar in intent if not in content to the “Best Management Practices (BMP)” for countering piracy, should be promoted to masters and owners of vessels operating in the Mediterranean, and updated on an ongoing basis as the BMP have been.

These ideas may have political plausibility: the EI special summit on migration called in response to the sinking in April focused on increasing information sharing and a coordinated response to migration, and this approach represents one way of operationalizing these goals. The track record of counter-piracy operations suggests that this may be an important step forward in maritime security: the coordinated multi-stakeholder approach has already worked to solve one major problem in the maritime domain.  Why not see what value it holds for this one?